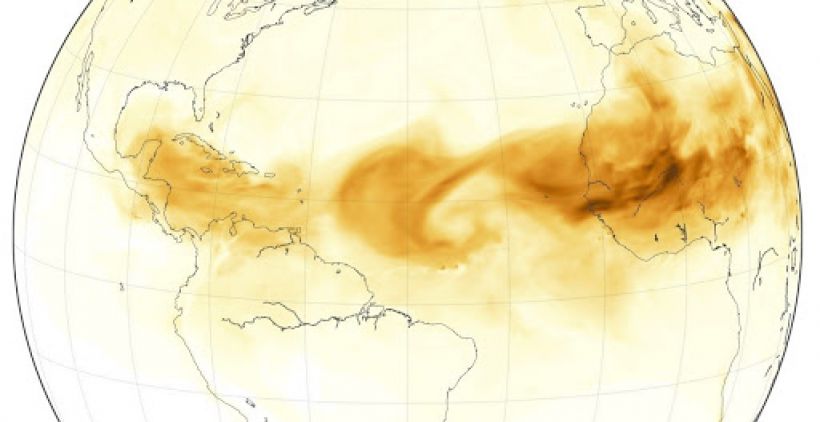 Studying the processes of transport of smoke from the fires of tropical Africa and the dust of the Sahara Desert, and its deposition in marine sediments to understand how atmospheric circulation has shifted in the past, and to be able to predict changes in the future, considering the current context of climate change on the planet. These are the main objectives of the scientific expedition carried out by researchers from the Institute of Environmental Science and Technology of the Universitat Autònoma de Barcelona (ICTA-UAB) within the framework of the European Research Council (ERC) project PALADYN, in collaboration with researchers from the University of Rhode Island, led by Professor Rainer Lohmann.

Tropical climates are changing rapidly in the most populated regions of the planet due to natural and anthropogenic factors that alter the atmospheric circulation of air masses. However, there is still much ignorance about how this affects the distribution of global precipitations under global warming. One hypothesis suggests that rains will be accentuated in the humid areas of the Earth while droughts will be more extreme in arid areas. However, existing simulation models have not been able to prove this due to the complexity of studying the atmosphere in the past.

The PALADYN project, led by ICREA researcher at the ICTA-UAB Antoni Rosell-Melé, aims to determine changes in tropical atmospheric circulation in the past 5 million years (wind direction and speed, and rainfall distribution), with special attention to past episodes of extreme heat and cold, in order to establish its natural range of variability.

To do so, researchers gathered samples of soot (pyrogenic carbon) and dust from tropical Africa along the oceanic transect that goes from the Barbados Island in the Caribbean, to the Cape Verde Islands and the Florida peninsula in the USA. For four weeks, the scientific expedition collected samples of soot and desert mineral dust suspended in the atmosphere, the water column and the sediments of the bottom of the Atlantic Ocean by using specific instruments, aboard the US oceanographic ship RV Endeavor.

This is a good moment in the year to make this transect given that the winds are blowing from the African continent towards South America, the Sahara is the dustiest desert on the planet, and the tropical savannahs and grasslands of Africa are where the majority of fires systemically originate.

“Desert dust and soot is transported by the winds and deposited in deep-sea sediments. Samples collected at different depths of the water column or in the seabed will offer us information about their transport and deposition weeks, decades and thousands of years ago”, says Antoni Rosell-Melé. He adds that this will allow them to “have a valuable continuous record and to establish patterns about changes in atmospheric circulation throughout past history, and relate it to the warmest and coldest periods in Earth's history”. The research focuses on the area of ​​the tropics where there are dry and wet seasons, and more solar radiation. “The tropics are the energy engine of the climate system; if we understand the changes that occur in the tropics, we will understand how the rest of the global climate changes. It is necessary to know where the rain zones may move or if the deserts will spread in the future”.

The research also analyses the role of desert mineral dust in ocean fertilization processes and in the regulation of the planet’s climate. When deposited in oceans, the nutrients it carries allow fertilising the ocean and contribute to a greater productivity of algae, which absorb the CO2 found in the atmosphere. In addition, atmospheric dust contributes to the cooling of the planet by acting as a screen when suspended in air, therefore reflecting solar light back into space. In contrast, the soot suspended in the atmosphere could have the inverse role in global warming because its darker color would absorb heat, contributing to an increase in the temperature of the planet.

The new data will make it possible to refine prediction models of atmospheric circulation, carbon cycle, precipitation and wildfires, issues that are of paramount global importance from scientific as well as societal standpoints.